Jurij and George met in Greece in January 2019. Very soon, they started working together, rehearsing and discussing about improvisation (and kefir grains). Through this duet, all big questions arose: how can we co-exist on stage? How can we make use of the changes and the moments of inhibition? How can we create together, while each one focuses on his/her actions?

About Jurij Konjar (fb page link)
Jurij Konjar was born in Ljubljana in ’78. He trained Judo and practiced singing from an early age, then began dancing with ballroom competitions. In 2007 he suffered a head injury that shifted his focus towards the potential of the present moment. In 2009, an in-depth observation of Steve Paxton’s Goldberg Variations video triggered what became an ongoing improvisation practice and provided a basis for a rich ongoing dialogue. Some of his performances are Goldberg Variations (2010), For Juliano Mer-Khamis (2013), Still (2014) and a collective work Monday at eight (2017). Collaborating with Steve Paxton, he has performed Paxton’s work Bound (1982), Flat (1964) and Quicksand (2016). His own research is deeply informed by Contact Improvisation and Lisa Nelson’s Tuning Scores practice. 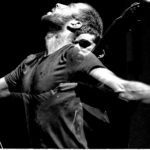 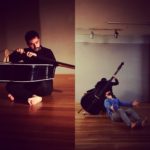 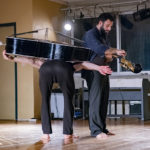