Sound plays a key role in George Kokkinaris’ performances. Ηowever, various elements from dramaturgy, acting, dance and poetry are incorporated within his work. Each time a unique ritual takes place influenced by the audience, the space and environment as well as the social status quo.

Touch is a solo performance project that was launched in November 2018, simultaneously with the release of the homonymous album. An open and sincere communication with the audience is one of its objectives. Not dissociated from everyday life, George Kokkinaris’ process in this work is solely based on improvisation. Like meeting a friend or having a chat with a stranger at the super-market, Touch attempts to recapitulate human relationships through performing on stage.

Every day, the artist must take risks in order to create original and fresh work. This on-going process will, also, clear the path of communication between performer and audience. Art creation entails being in a state of constant pursue of the innovative and exploration of the new. Improvisation plays a key role to this journey. 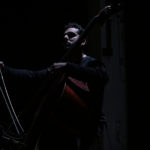 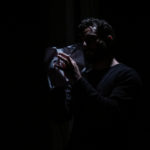 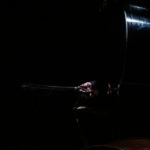